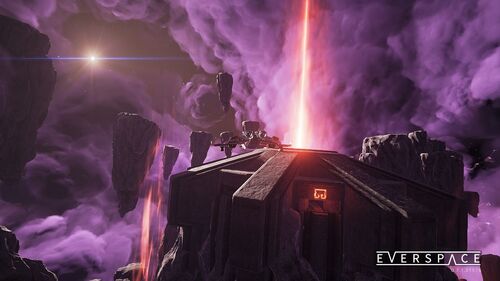 There is little known about these mysterious structures, but they were most likely constructed by an old race called the Ancients. They are always guarded by a single Ancient Warden, a very powerful enemy. Once the Ancient Warden is defeated, a red glow (See gallery) will surround the player's ship and the monolith in the center of the structure can be opened. Once the monolith is opened, a Glyph will drop and the warp gate at the top of the monolith room will activate.

The first time an Ancient structure is found, the warden does not appear until after the player goes in and leaves the inside of the structure. In all subsequent Ancient Depot zones, the Warden will already be spawned. Once all glyphs are unlocked, the monolith will only yield Dark Matter or Dark Energy, but will still activate the warp gate. One or two Ancient Splitters will often spawn in these zones, but not always.

When used, the warp gate will jump the player forward several zones, skipping at most 7 zones, typically skipping at least 2. Sometimes, if the warp gate is in a penultimate zone of a sector, it can skip the next sector entirely and go to the one after. Using the warp gate does not use fuel, similarly to Jump Gates and wormholes.

Two ancient structures will always generate in each new run, never in the same sector, and possibly never in sector 1 or sector 6.