You can help us by uploading an image here because: needs icon
If the problems have been addressed, please edit this page and remove this notice. It will start with {{Upload and end with }}. 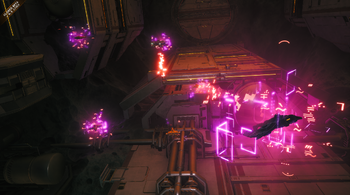 The Annihilator Virus is a warfare device. It infects the target with a virus that spreads to nearby targets every 2.0s. After 10s, all affected ships suffer 385 damage with a 40s cooldown.

It has three unlockable modes which cost one device upgrade token each. Only one mode may be selected at the same time.