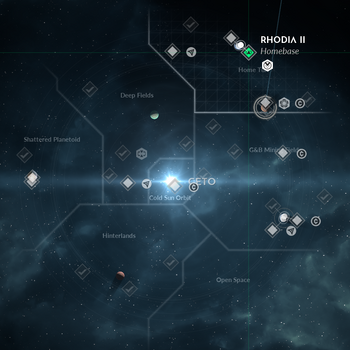 Ceto is the starting system of Everspace 2. This is where Adam Roslin was working as a wingman for G&B with Corben "Ben" Grendal, and where he met his first two companions Dax Bashar and Dr. Delia Wendo, as well as recovering a HIVE unit. Ceto is home to a large G&B presence, focusing on mining Aetheum crystal shards, which appear to be abundant in this system. There is also a significant Outlaw presence, most likely attracted by G&B, raiding bases and freighters.

There is a single Jump Gate here at Union Bridge, connected to the Union system. It is initially inaccessible, requiring a key from a military HIVE AI unit, which Hero acquires during the main storyline.

A small region in the center of Ceto encompassing the star and a single site in orbit.

The first revealed region, located in the upper-right of the Ceto system with eight visitable sites.

An empty region in the lower right of Ceto.