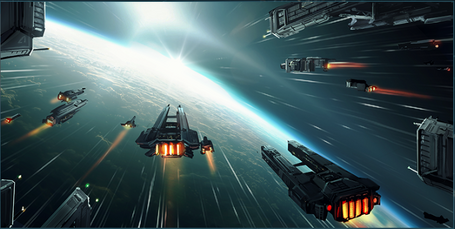 The Colonial Fleet in the Everspace Codex

The Colonials or Colonial Fleet are one of five known factions in the Everspace and Everspace 2 universe. The fleet is the means behind human expansion, originating from the Sol System. They are predominantly human, although other unknown races take part in the fleet. The fleet has made extensive use of cloning technology to help aid the expansion and war efforts, which Adam Roslin was a part of. Soon after their arrival to Cluster 34, a devastating large-scale war erupted with the indigenous Okkar. The war was ended with a ceasefire and a peace treaty, resulting in the Demilitarized Zone.

For information specific to the original Everspace, see Colonials/Everspace.

For information specific to the Everspace 2, see Colonials/Everspace 2.