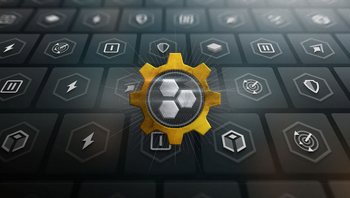 Crafting is a main mechanic in Everspace 2 which is unlocked by having a Cargo Unit equipped. Crafting provides a use weapons and modules considered bad, useless, or outdated, with the ability to turn them into better gear which can replace outdated equipment or avoid some grinding for or buying that item.

Crafting can be accessed by holding down the Menu Action 2 button on an empty inventory slot, which is 'R' by default on a keyboard. If there is no empty slot, crafting is not available (modification still is however).

In order to start crafting and modifying after equipping a cargo unit, equipment needs to be dismantled which will give rarity-specific components and crafting XP. XP is needed to unlock blueprints of each unique equipment of each rarity. Once the blueprint is unlocked, it can then be crafted with components, increasing in cost as the rarity increases.

Existing items can also be modified in three different ways:

Crafted or modified items will be labeled with an "Improvised" tag which means it cannot be modified further, but can still be dismantled.

Dismantling yields may differ based on bonus from cargo units. Needs to be tested.