Everspace is a single-player 3D space shooter with rogue-like elements and non-linear storytelling from the creators of the "Galaxy on Fire" series. It came out of early access on May 25, 2017. It also has a sequel, Everspace 2.

As an Everspace pilot you travel and explore, hunt for resources and uncover hidden secrets as well as fight and upgrade your ship and character. Every time you die, you have the opportunity to upgrade your ship, improving your chances of success in subsequent runs. Many upgrades and modifications are visible on your ship in full detail.

The goal of the game may sound simple: Reach your destination. However, with every new attempt you will face all-new challenges as the route to your destination and the obstacles you must overcome vary each time you play.

When you start a run, a new course to your destination will be plotted so that it is very unlikely that you will encounter the same setting twice. To survive you will have to adapt to the circumstances at hand:

As an Everspace pilot you need to deal with lots of decisions during your journey. Each and every one will affect how you experience your personal quest to the ultimate goal. Because of this no Everspace run is like any other.

In order to leave the system and jump to the next one, you will need to gather enough fuel to power up the jump drive and at the same time collect credits and resources to craft items and upgrade your ship.

The mix of persistent progression (blueprints and Credits) and temporary progression (crafting and equipping your ship during a run) combined with an ever-changing universe and a rewarding story will make you want to start over again and again to eventually reach your final destination. 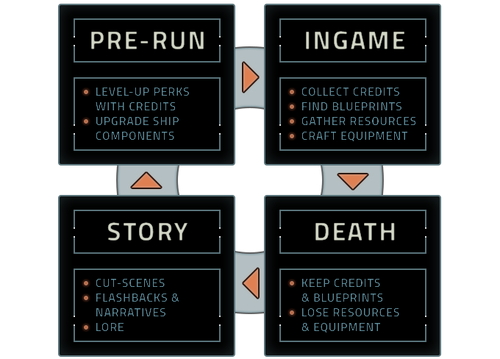 VR support is optional. Some VR systems require 90 FPS on two screens. With that in mind, we will provide a lot of scalability, so you'll get awesome graphics on powerful systems and will still be able to play at very good frame rates on older systems. You won't be needing hardware acceleration for physics. However, you will require more advanced hardware in order to use virtual reality devices.

This wiki is not used for game support. It is best to ask on the Steam forums, the official forums, or on the official Discord.