You can help us by uploading an image here because: need more structures/stations
If the problems have been addressed, please edit this page and remove this notice. It will start with {{Upload and end with }}.

Grady & Brunt Prospects in Everspace are a neutral faction encountered in almost every zone of each sector. 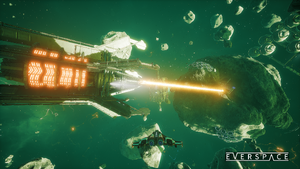 A screenshot of a mining laser at a G&B mining operation, with the fuel tanks of another G&B structure visible.

G&B ships and structures can be found in almost every sector and zone, often being attacked by Outlaws. Many mining operations can be found, with mining in progress. You can stop by and pick up dropped Ore or Gas from the mining lasers before the mining drones pick it up, without negative repercussions from G&B. However, the large mining lasers (if accidentally flown into) will deal 400 hull and shield damage per second.

The ships and structure defenses are neutral, but if attacked or their containers are broken by the player, nearby G&B ships and turrets will become aggressive. The attack can also be reported, which makes them aggressive throughout the entire sector. The attack will not carry over between deaths and the likelihood of them reporting the attack to other sectors be decreased with the Diplomacy Perk. The last two levels of that perk also enable G&B assistance to jump in and assist the player in fights against Outlaws. They will jump out as soon as all nearby threats are gone, and will not pursue other enemies like the Ancients from the Ancient Friends Glyph.

Service Stations are owned and operated by G&B. There are also large, unpowered G&B Factories. Once powered up, G&B freighters will start jumping in and out of the factory, and the factory's services will open up.

Occasionally when jumping into a zone, HIVE will inform the player of a G&B freighter or ship in need of assistance. Completing a certain task for them will award credits. These missions can include:

There are several types of G&B ships. G&B ships have a yellow trail.