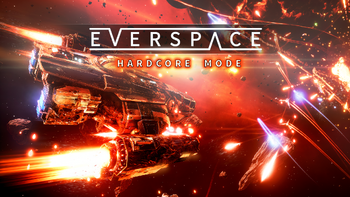 Hardcore Mode offers the ultimate challenge to the most veteran Everspace players. In this mode, pilot perks are set to a fixed layout and ship perks are only upgradable at the end of each sector with credits earned. The player must also select a handicap that will impair their gameplay during the next upcoming sector only. No progress is saved between Hardcore runs and all credits should be used during the run itself. All blueprints are unlocked in Hardcore except for Throng Beacon and Tareen Beacon.

The UI changes to a blood-red tinge while in Hardcore Mode as a reminder of its difficulty.

The final sector (Sector 7) of Hardcore Mode is entirely different than the normal campaign and was derived from the Xbox Game Preview's end level placeholder boss fight.

Beating Hardcore for the first time permanently unlocks the Retro handicap as a toggleable option for easy/normal/hard and hardcore runs.

The final sector is similar to an Ancient warp gate location, but without the scanner impairment. It also has several large asteroids with an extremely high Outlaw presence and structures. The objective to win is to destroy four shield generators that are blocking the entrances to the warp gate and to find and free an Ancient Warden in a cage. Once freed, the player needs to kill it and activate/go into the warp gate to win and complete the run.

While pilot perks are not upgradable in a hardcore run, there are some that are upgraded already:

There are a total of 23 available handicaps in Hardcore Mode.

Each time the player completes a sector they are presented with two randomized handicaps and must choose a handicap for the next sector. Only one handicap is active at any given time; thus choosing a new handicap will replace the previous. Any effect from a handicap will be removed when it is replaced, including effects that are marked as "permanent".

Hardcore is an extreme challenge, as it limits Perks and introduces the new handicap mechanic. Be comfortable with hard difficulty before attempting this mode.