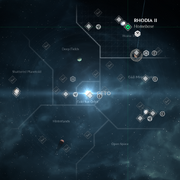 The current alpha-build map of Ceto, the starting system.

Everspace 2 mainly takes place in the Demilitarized Zone of Cluster 34. Currently, there are eight planned planetary systems divided into regions with several visitable sites each. All locations are handcrafted except for the random signals found during supralight travel, which are randomized similarly to each zone in Everspace. Regions currently do not have any impact on sites & random locations, but in the future they may be controlled by different factions giving them unique aspects or modifiers.

While the Colonials already have this entire region mapped on AETERNA, unfortunately Hero was forced to disconnect his ship's nav from AETERNA to avoid detection. Dax was able to scrounge up some old data from his homebase which fills in some regions of the map in Ceto. Most locations are marked as undiscovered sites until visited or do not appear until certain missions are completed.

During supralight travel, there is a chance for a random location to get pinged and show up on the map nearby. They can be marked "Distress Call", which will have several G&B Freighters under attack by Outlaws. Helping them by destroying all the Outlaws will reward the player with Credits. They can also be marked as just an "Unknown Signal" which can be quite random in content. They can be a sparse asteroid field with some basic loot and enemies, or a major Outlaw base. Any unknown signals with an outlaw base will have an accompanying location challenge to destroy all of the enemies and structures on the base, but this does not give an Aeterna Bypass as a reward like other location challenges.