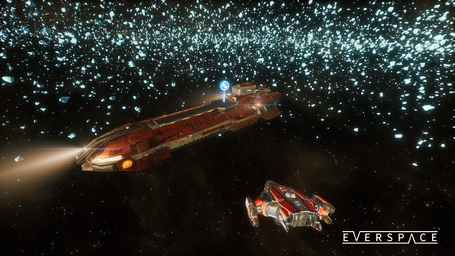 An in-game screenshot of a trader.

A trader is a neutral ship found in Everspace, and is encountered randomly throughout the sectors. They are marked with

, but that only appears on the sector map if the Sector Scanner Perk is level three or higher.

The trader has one service, which involves:

Only a certain selection will be shown per trader, and the stock of trades does not refill.

Attacking the trader will cause it to turn hostile and retaliate, but does not make G&B hostile, as presumably the trader is not affiliated with the faction. Regardless, there's not much reason to attack the ship, as it does not drop anything and is very difficult to kill. While it has only moderate defenses, it has extremely high hull durability and will warp away when its health reaches a certain point.