Difference between revisions of "Union" 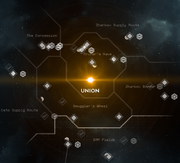 A fully explored map of Union

Union is the second system in Everspace. It is easily recognized by an warm-colored theme (and a yellow star) with many locations inside nebulas or around gas planets. It also has very high Grady & Brunt Prospects activity due to its location, acting as a trading hub for the corporation and the DMZ as a whole with three Jump Gates present leading to Ceto, Drake, and Zharkov.